The Importance of Being Earnest starring David Suchet: chronicle of a tremendous evening

The Importance of Being Earnest by Oscar Wilde, starring David Suchet as Lady Bracknell

On Saturday took place the last performance of The Importance of Being Earnest starring David Suchet at the Vaudeville Theatre. I was there last Tuesday and I really enjoyed the play.

Last week, as you may have noticed from my last posts, I was in London. Even though I planned lots of things to do during the three days and a half I was there, I will tell you a secret: the whole trip was planned around one play I absolutely wanted to see before it ended: The Importance of Being Earnest starring David Suchet as Lady Bracknell at the Vaudeville Theatre.

A big fan of David Suchet, especially as Hercule Poirot (since I have loved Agatha Christie’s books forever – the first time I read them all, I was 11), but also of the Oscar Wilde’s play, which is my favourite, such a performance was unmissable for me. Therefore, as you may imagine, I had great expectations last Tuesday when I arrived at The Vaudeville Theatre on the Strand – and they were met.

A grand satyre of Victorian society

The Importance of Being Earnest, A Trivial Comedy for Serious People (its whole name), was the last play written by Oscar Wilde that was performed before his trial and exile. It is an extremely funny satyre of the Victorian ways and social conventions, especially regarding the High Society and the institution of marriage.

It tells the story of Jack Worthing who, in order to escape his strict life and obligations in the country, made up Ernest, a fake brother with a very dubious lifestyle in London. Therefore, he is Jack in the country with his young ward, Cecily Cardew, and Ernest when in town with his friend Algernon Montcrief. Algernon has a cousin, Gwendolen Fairfax, and Jack, who is in love with her, intends to ask for his hand. But first, he will have to convince Gwendolen’s mother (and Algernoon’s aunt), Lady Bracknell, that he is a fine enough suite for her daughter. 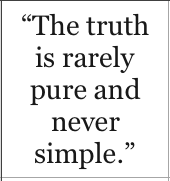 The truth is rarely pure and never simple – Oscar Wilde, The Importance of Being Earnest

Never speak disrespectfully of society, Algernon. Only people who can’t get into it do that – Oscar Wilde, The Importance of Being Earnest 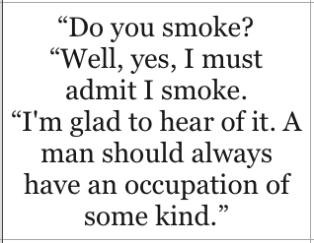 Do you smoke? Well, yes, I must admit I smoke. I’m glad to hear of it. A man should always have an occupation of some kind – Oscar Wilde, The Importance of Being Earnest 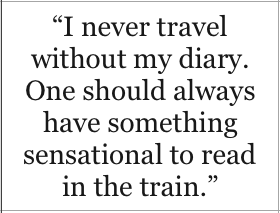 I never travel without my diary. One should always have something sensational to read in the train – Oscar Wilde, The Importance of Being Earnest 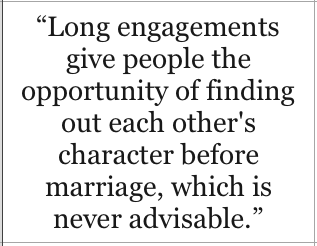 Long engagements give people the opportunity of finding out each other’s character before marriage, which is never advisable – Oscar Wilde, The Importance of Being Earnest

One of the most adapted plays

This play has know many adaptations and the uptight Lady Bracknell is undoubtedly its tastiest character. Dame Judy Dench has played the role twice, both on stage in Sir Peter Hall’s production in 1982 and in the 2002 movie, also starring Colin Firth, Rupert Everett, Reese Witherspoon and Frances O’Connor. Dame Maggie Smith was Nicholas Hytner’s Lady Bracknell in 1993. The play has been produced once with an all-black cast (Talawa Theatre Company, 1989) and another time with an all-male cast (Abbey Theatre, Dublin, 2005). As for the role of Lady Bracknell, David Suchet was definitely not the first one to wear her dresses since Geoffrey Rush had already played the part in Australia and Brian Bedford in New York.

This was still a great challenge,especially for an actor mostly known for his Hercule Poirot impersonation, a role he kept alive for 24 years (from 1989 to 8 January 1989 to 13 November 2013). Would he be able to shake off this image I had of him (as many fans probably did)?

Well he did. David Suchet shined as an incredible Lady Bracknell, wearing the corset with class and dignity. And the faces… I wish you could all have seen the faces he made. David Suchet did translate perfectly on stage the very hung-up Lady Bracknell, in a manner that showed how much the Lady enjoyed entertaining her audience. Every time she would entered the stage, the audience would fill with laughter for he was so funny. 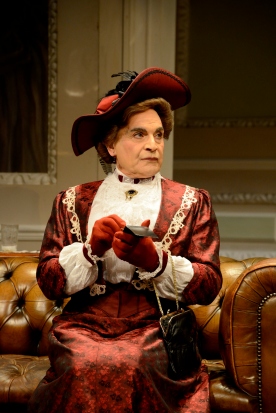 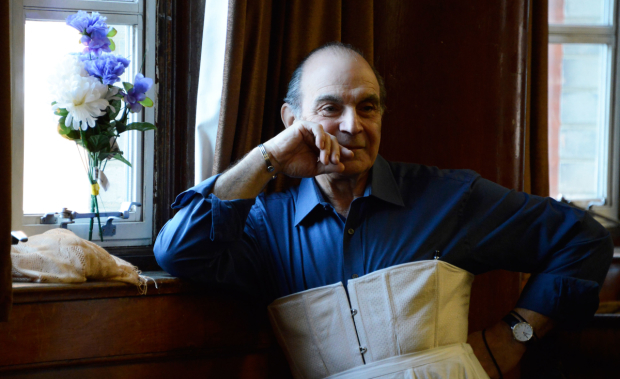 But David Suchet is not the only reason I adored this adaptation from Adrian Noble. The director got the perfect cast for every role and offered quite a kinky performance, from Algernon (Philip Cumbus) lying on the couch on the first act (in such a manner no-one would imagine in Victorian’s high society) to the (way too) naughty governess Miss Prism (Michele Dotrice) and Reverend Chasuble (Richard O’Callaghan), not forgetting the very not so innocent only 18 year old Cecily Cardew (Imogen Doel) and her unforgettable way of bending in front of Algernon.

I was very happy to discover the thrilling Imogen Doel who gave us a very accurate Cecily, this young girl living in the country and dreaming of a way more exciting life. I must say she was the best Cecily I ever saw on stage and I do hope to see more of her in the future. Philip Cumbus was a particularly good Algernon, playful and naughty; while Emily Barber and Michael Benz, respectively Gwendolen Fairfax and Jack Worthing, were just as good. And what could I say about Richard O‘Callaghan (the Reverend Canon) and Michele Dotrice (the governess Miss Prism), so, so far away from the respectability their positions should inspire them! Jumping and giggling like two joyful kids in love, the governess and reverend were truly cheering to watch and so very funny. 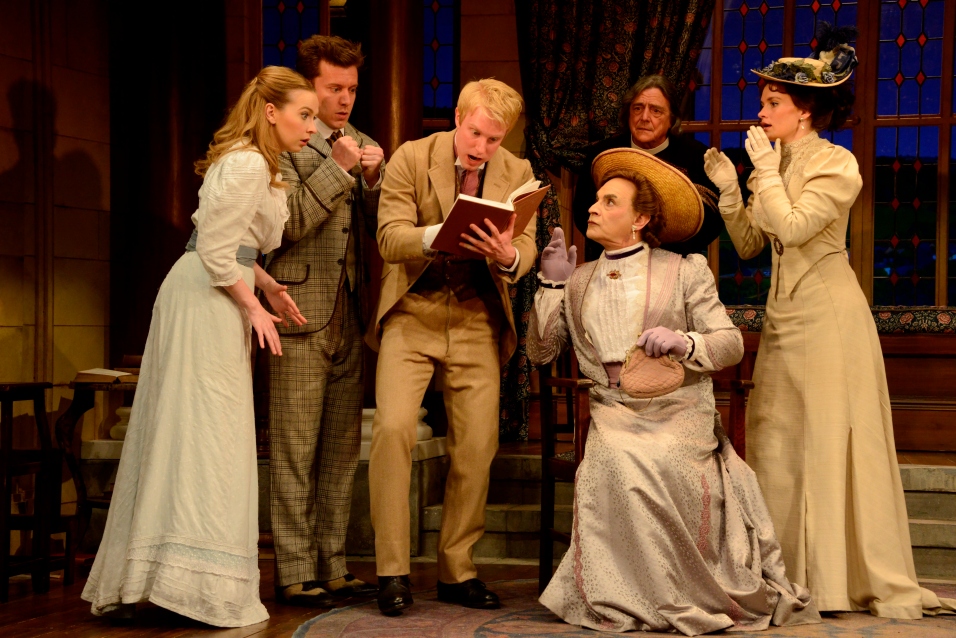 At the end of the play, I went with my friend round the corner to find the stage door in hope that I would be able to ask the cast to sign my programme. If at first I was to go to get David Suchet’s autograph, after the performance I was very eager to get everyone’s. The ravishing Imogen Doel, as well as the very nice Michele Dotrice and Michael Benz took the time to stop and sign everyone’s prograemrs, very nicely. I was a bit disapointed when Philip Cumbus left very quickly after we were all asked to line on the sidewalk while waiting for David Suchet.

But then all was forgotten when we were all shown to the grand actor in small groups, since I got to see the Great Hercule Poirot with only my friend. He was as nice as one could hope and expect from one of their favourite actors, shaking our hands (twice) and agreeing to answer a question about his favourite tea for my other blog. All together, that encounter probably lasted less than a minute but it was so impressive that it felt like a lot more and, when we got out with my friend, we could not help but shout, so happily: « WE’VE MET HERCULE POIROOOOOOOT!!! » Yes, that’s right, two crazy and shameless Frenchies shouting in the street. But you cannot be mad at us, since it was such an enjoyable evening. 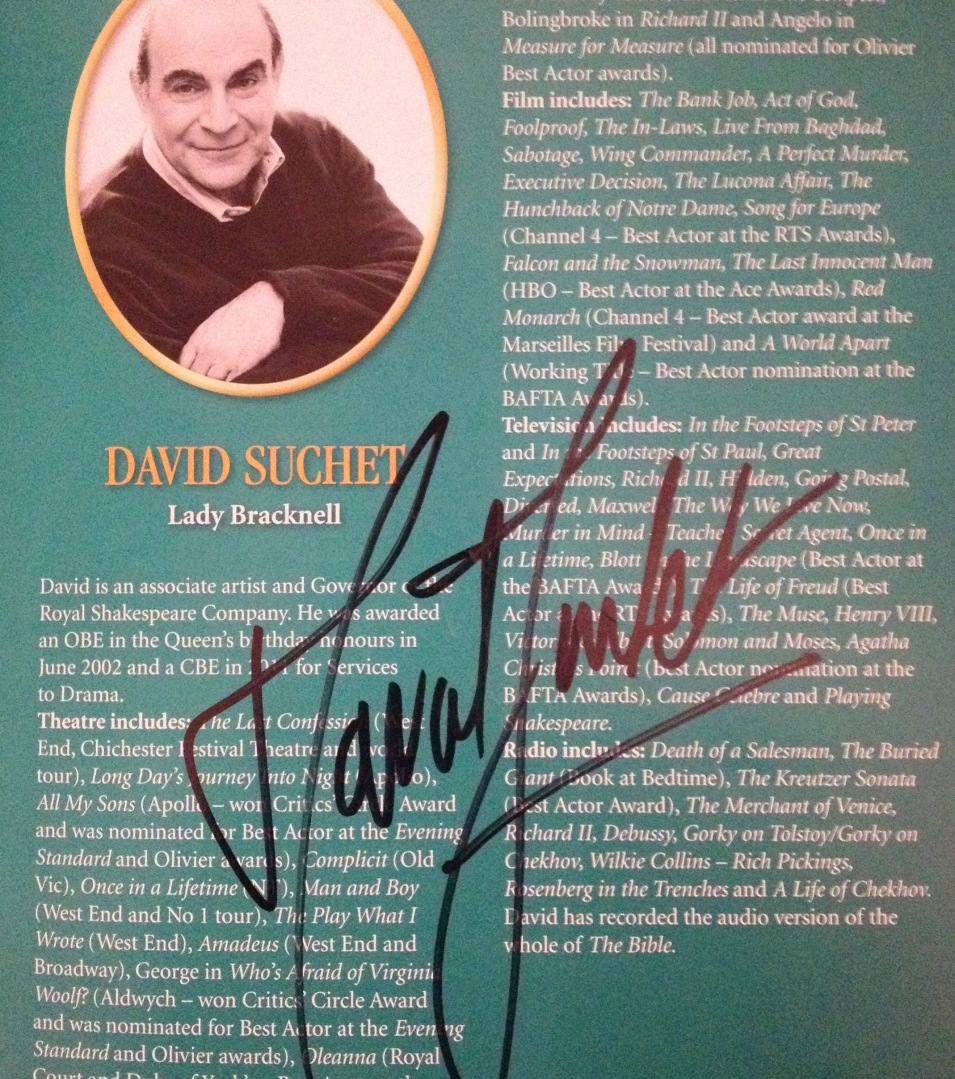 To end on a cheerful note, here’s a collection of some of the best quotes from Oscar Wilde’s Importance of Being Earnest. Enjoy! 🙂

4 réflexions sur “The Importance of Being Earnest starring David Suchet: chronicle of a tremendous evening”